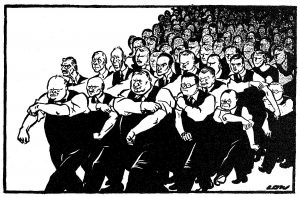 On May 10, 1940, German armed forces invaded the Netherlands, Belgium, Luxembourg, and France.  That evening, the chairman of the UK’s Labour Party, Harold Laski, wrote “We are at a turning point in the history of the world.”  Less than a week later, Winston Churchill, newly installed as Prime Minister, and Clement Attlee, the leader of the opposition in Parliament, announced an agreement to form a coalition government in order to prosecute the war.  Unity was the watchword.  David Low’s famous cartoon from that time vividly illustrates the fierce resolve of the leadership and, indeed, the public.

END_OF_DOCUMENT_TOKEN_TO_BE_REPLACED

There are a lot of ideas out there to save the world from our global environmental crisis.  Lester Brown’s Plan B 4.0: Mobilizing to Save Civilization, Project Drawdown, and the Green New Deal among them.  A friend of mine pointed out a new essay in the New York Times this morning, “Climate Change Is Not World War.”  The writer, a professor of English, purports that “We are underestimating both the deep national trauma of World War II and our present challenge.”  Here’s my reaction. END_OF_DOCUMENT_TOKEN_TO_BE_REPLACED