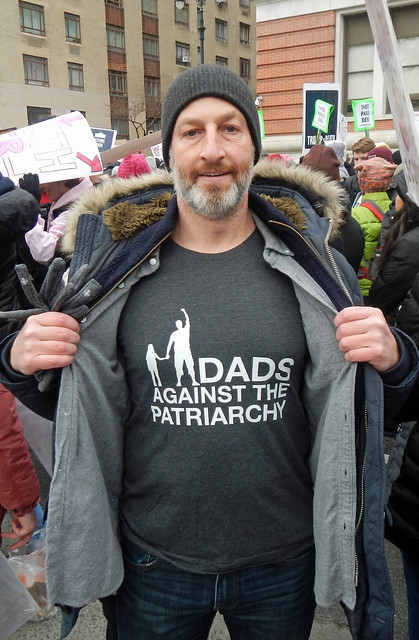 That’s not me, but it’s certainly my sentiment.  I’m a dad and I’m against the patriarchy.  I’ve written about the evils of the patriarchal mentality, and was reminded after the catastrophic election in 2016 about how the New, Improved American Right is fed by it.

I was out with my daughter for the march in 2018 and yesterday with my wife.  They went together in 2017 for the big inaugural event in Washington, along with a million of their sisters and brothers.

The turnout across the country was nothing like what it was the first year, but the point is that so much of that initial energy has translated into action.  The House of Representatives would not have flipped in 2018 without the focused activism that grew out of not only the Women’s March, of course, but the many other demonstrations, lawsuits, heightened organizational energy, and a reawakening of the understanding of just how fragile our democracy is here and how threatened it has become, not just by Trump, but by decades of dedicated corruption of it by special interests.  (See the fossil fuels industry as a prime example.)

There was an extremely thoughtful piece from Vox the other day, The Women’s Marches are shrinking. Their influence isn’t.  It’s a wonderful, hopeful reminder of how much we’ve accomplished in the face of some terrifying opposition over the past three years.  We’ve got a long way to go, but, as always, it’s up to us:  “Pray for the dead, and fight like hell for the living.”

Here’s a little TV coverage of the event in NYC yesterday:

This site uses Akismet to reduce spam. Learn how your comment data is processed.